Leading a school ‘like riding a thoroughbred’ says Headmaster

School life and horseracing may seem worlds apart – but perhaps not as much as you might think. According to Mr Helliwell, St Faith’s is much like “riding a thoroughbred” where his role as jockey is to rein and channel a constant flow of ideas. Five years after coming to the School, Mr Helliwell spoke about the changes he has implemented, the challenges encountered and what lies in store for the future.

Key focuses so far have included sustainability – for which the school won an Ashden Award in 2014 – and changing our first language from French to Spanish. We have also introduced computing and engineering to the school curriculum, with the latter now entering its second year of lessons.However according to Mr Helliwell, traditional aspects of education such as social skills and an academic core are still as important as ever. “We are a blend of traditional and modern,” he said. “To continue on the same path we need to keep changing – it’s not going to be a revolution but it will be an evolution of continually looking at what the children need in the future.

Changes in future could include the introduction of Mandarin lessons and the potential creation of a “science hub” to bring the school’s computing and engineering classes even closer together. Mr Helliwell said he is optimistic that he will be able to support other schools with engineering in the future once the new curriculum has been fine-tuned. “The children absolutely love it,” he said. “[But] when we set up engineering I never wanted it to be just St Faith’s – I want the development of engineering to be at least Cambridge-wide, if not wider. The only thing holding us back is our ambition.”

Lessons aside, Mr Helliwell said one of his favourite things about being head was getting to know each child – and he even presents each and every one with a card when their birthday arrives. “That’s the joy,” he said, “actually meeting everybody and getting to know everybody. I meet every child, every member of staff, every parent. It gives me a real sense of community.” He added that this sense of community extends beyond the school walls, with music and sports groups from across the area able to take advantage of the facilities at St Faith’s free of charge.

However there are wider challenges all headteachers have to contend with, Mr Helliwell added, not least the ability to cope with constant change across the education sector as a whole. He said: “The amount of change in education in the last 15 years [has] been very difficult for schools to cope with. It’s become a political football and there’s rarely a month goes by without some change announced. I do hope that one day it will settle down and that schools are able to get on with educating children in a consistent way because the danger is that children become guinea pigs. It’s five years for a government in office and that’s not long enough to plan a proper educational programme.”

He continued, “If I had my wish I would take education away from political control, like they have done with the Bank of England interest rate – ever since they did that the interest rate has settled down. “I would like them to do that with education so that we have a 10 [or] 20-year plan for education and not a 3 to 5 year plan.” 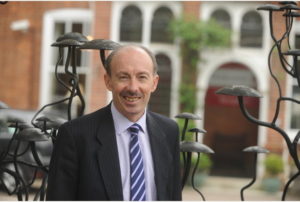